Bill 101...and the Slippery Slope to "Poutineism' 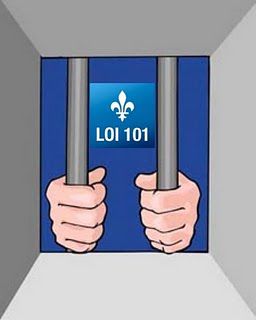 From birth we are taught that equality before the law is the hallmark of any democratic society.
And so when a state treats one citizen differently than another, and affords unequal rights based on religion, ethnicity, origins, language or religion, it surely must offend our conscience as it betrays the basic tenets of democracy as we define it.

But somehow in Canada, our highest court has ruled that for a 'greater good' such discrimination is justified and so we are subject to the precepts of the infamous Bill 101, a law that makes a mockery of the term equality.

As a result, citizens of Quebec are imbued with certain rights, or lack thereof, based on an accident of birth, be it the language of their parents or the location of their birth.

My discomfort with Bill 101 is not rooted in any negative experience that I or my family may have suffered under its application.

You see, I am born of the privileged class which enjoys certain rights and freedoms that other Quebecers are denied. I am English.

Like the British royal family, I get to pass down to future generations these rights in perpetuity, a neat benefit that makes me feel superior lucky.

I and those like me, possess a birthright that is unique in this province and if you are Francophone or have emigrated here from another country, my rights trump yours.

I can, as we all know, opt for a publicly-funded English education, while you, my fellow citizens, are told that such a choice is not  available to yourself or your family, because you have been forcibly drafted in the 'war' to preserve the French language and culture, while I am given a deferral.

Yes, Monsieur or Madame Untel, it doesn't matter if your Quebec roots date back to the 17th century, I and my descendants, relative latecomers to Quebec, are afforded more rights than you and what is most puzzling to me is that most of you are fine with it.

This post is not about Ethnics and immigrants who came to this province knowing full well they'll be denied equal rights.
In many respects it's a bargain they made, the rules were clear enough before they made their decision to make Quebec their home.

But the fact that the future rights of two children, one French, one English are unequal, even though they were born side-by-side in the same Quebec hospital, on the very same day, offends my sense of fair play, I can't help it.

Now most francophones reading this piece will argue that this limitation or infringement of personal rights is something that they readily embrace and voluntarily accept and that this opinion is also held by the the majority of their francophone brethren.

If Francophones wish to limit their own rights for the greater perceived good, that is their right and who am I to tell them otherwise.

Today, some thirty-five years since the imposition of Bill 101, Francophone language militants will tell us that the law was essential in preserving Quebec as a French culture, while other like myself would argue that French in Quebec had flourished and grown for over 300 years without any artificial help.

It doesn't matter, the argument is moot and the law endures, if for no other reason than because it is a source of pride, an everlasting symbol and tribute to the victory of French over English in this province.

But there is no doubt that Bill 101 has had an ancillary effect on Quebec society, it has promulgated the notion that restrictions of all manners are acceptable in defense and promotion of the French language and that not only are these restrictions necessary, but desirable.

Today, Quebecers remain proud that they are free of the once powerful and domineering Church, whose unelected officials ruled Quebec society with an iron fist until the Quiet Revolution of the 1960's liberated Quebecers from the dominion of Rome.
At its height, almost every aspect of the lives of every individual Quebecer was controlled, to the point that the parish priest advised families as to how many children to have, or what kind of employment to pursue.

But this new found freedom was short-lived and barely two decades after throwing off the shackles of the Church, language replaced Christianity as the religion of the masses and a new cabal of unelected and self-appointed  'priests' has arisen, deigned to instruct Quebecers how to live and act with the same force and holier than thou attitude that the church historically demonstrated.

This is the slippery slope that Bill 101 has led us to.
As Yogi Berra said it,- It's deja vu, all over again.

Today Francophone Quebecers are once again instructed on how to live and conduct their personal lives.

The likes of the Societe Saint-Jean-Baptiste, Impératif français, Mouvement Québec français, as well as a plethora of other organizations have elected themselves as defenders of the faith, dedicated to defend and promote their elitist and narrow view of Quebec society by exhorting francophones to adopt a certain comportment and attitude, one perceived to promote the French language and culture, according to a narrow and dogmatic view.

So ardent are these zealots that their exhortations sometimes border on the ridiculous;


"The situation of French in Quebec:  Increasingly, we see young francophone parents giving English names to their children.
Is this just a preview of the future Anglicization of Quebec? These young people who without any pride, embrace American music and movies and thus could not care less of their origin.
I think we should talk about this publicly, and even make changes to Bill 101.
Merci." Submitted by Robert David, novembre 8, 2011" Link{fr}

And so the author demands a law that would force Francophones to give their children good Christian French names, stop watching English films or listen to English music.

Unfortunately, the author above is not alone, far, far from it.

Last week I told you about an outraged citizen in Chicoutimi who was deeply concerned that a local theatre would be showing an original English film one day a week.
The writer was worried that francophones would be allowed to see Hollywood films in their undubbed English versions, a travesty and dangerous invitation to Anglicization.

An article in Le Journal de Montreal, by Mathieu Bock-Côté, is typical of the current dogma advocated by leading separatists who like the priests before them, wish to impose their particular view on society.
Mr. Côté, a self-styled separatist intellectual, is the latest wunderkind of Quebec media, someone who has a particular dislike for multiculturalism, believing that all minorities must give up their individualism and be absorbed into mainstream Francophone culture.
For want of a better word, I will refer to this political dogma as "Poutineism" in honour of an African women who before the Bouchard Taylor Commission, asked if she had to eat poutine to be accepted as a Quebecer.

Mr. Côté, complained about a Muslin organization that had started a service whereby Muslims could meet other Muslims seeking marriage within their faith.
Bad! Bad! Bad!
Mr. Côté, complains that Muslims are closing themselves off from mainstream Quebec society by choosing to remain within a 'clan'
I imagine that Mr. Côté would equally disparage J-Date or Marriage-Chretien....or perhaps not in the case of the latter.
And so, according to Mr. Côté, choosing to marry within one's faith is wrong, something to be opposed in the new Quebec.


"The sacrosanct right to be different must be balanced with the duty of similarity of identity. Being a Quebecer is not just about paper. It is also a question of identity. Those who join a society  must learn to integrate with those who welcome them." Link{Fr}

And so everyday Francophones are bombarded by dogma of Poutineism, proffered by idiots in the opinion section of vigile.net or in the mainstream press by deep thinkers like Mario Beaulieu or Mathieu Bock-Côté, all righteously reminding Quebecers, with the fervor of  bible thumpers, that Quebec is on the road to linguistic and cultural destruction.

In 2009, the tiny Quebec village was mocked for creating a "Code of Life" that immigrants were encouraged to adopt before settling in town. Read about it here and see the code.
I can tell you that in comparing the 'Code of Life' to 'Poutinism,' I much prefer the former.


POUTINEISM
I think the priests were less burdensome.

So what happened to free will in Quebec and what is to happen to those Francophones who don't want to drink the Kool-Aid?

Are Francophones high achievers who want to earn an 'ivy-league' quality diploma in a world class university like McGill to be chastised?

Are those Francophones that choose to make a life with an Anglo and decide to make their family English, traitors?

Are those who choose to attend a Madonna concert instead of Marie-Mai concert to be perceived as sellouts?

Are those Francophones who use every opportunity to polish up their language skills by speaking English to Anglos, contributing to the downfall of the French Quebecois nation?

And most importantly, are these Francophone 'heretics' who pursue English, within their rights to do so, even if it contributes to the downfall of French in Quebec? (Which is, of course, ridiculous)

Perhaps it is now the time to throw off the shackles of the French language supremacists who have taken over from the priests.
Perhaps it is time for a second Revolution tranquille.