Language Militants- Tea and Other Things They Hate

I don't know what Oprah Winfrey has to offer as a motivational speaker, but apparently many people believe it's substantial.
She packed the house at Montreal's Bell Centre last Thursday with tickets ranging from a $100 to an astounding $355.

During her presentation, she gave a shout out to a Montreal tea retailer,  DAVIDsTEA which may well be on its way to becoming the next Canadian North American superstar à la Starbucks.

Well perhaps that's a bit of an exaggeration, but the retail newcomer is a neat hybrid that combines an expensive tea experience with related gift  products.

After sending Oprah a loot bag of goodies, the company hit the jackpot with a priceless celebrity endorsement.


"Imagine, if you can, America’s most influential celebrity telling the world that she loves you and she loves your product.
And all of this, at the low price of next-to-nothing.
That’s the shorthand version of what happened Thursday and Friday to David’s Tea, a Montreal-based retailer of fine teas and tea-related products.
Oprah Winfrey told a sold-out crowd at the Bell Centre Thursday night that David’s was her new favourite tea. Several times.
It was a shout-out that sent shivers down the spine of audience member Melanie Barbusci, a David’s Tea employee heavily involved in the public-relations coup.
“We were so excited,” Barbusci said Friday, admitting that she came close to hyperventilating several times just by recalling the evening’s events for various media outlets.
Oprah mentioned Melanie by name from the Bell Centre stage, telling 15,000 frenzied fans that she had been delighted with the David’s Tea gift bag sent to her hotel by the younger woman whose passion was tea.
(For the few who don’t know, Oprah has a passion for people possessed of passion.)
“It was just a great moment that I will definitely remember,” Barbusci said.
If that was not enough of a brouhaha for the tea retailer, on Friday Oprah told her millions of followers on social media about her new favourite tea, via Twitter and Instagram.
All in all, David’s Tea “hit the jackpot,” marketing expert Demetrios Vakratsas concluded Friday. Read more

I hope this Montreal company does well, it has all the elements for success, a unique product that has a markup that would make a drug dealer blush, a young entrepreneur named David Segal who is backed by the solid management and financing provided by his uncle, veteran Canadian retailer Hershey Herschel Segal, founder of the legendary LE CHATEAU clothing chain.

Last month while driving through the tony Brooklyn neighborhood of Park Slope, I saw my first DAVIDsTEA outside of Canada. I've no doubt that the retailer will be successful in the high-falutin' neighborhood where $1,000 baby strollers are de rigueur and where shelling out $6 for a coffee is no big deal.
Despite hard times, there are plenty Park Slopes in the USA, neighborhoods where DAVIDsTEA can find success.

Build a unique or better mousetrap and the world will beat a path to your door.
This company has all the elements for success and can avoid the pitfalls of other Canadian retailers who expanded to the US, only to meet with disaster because they offered nothing new or innovative. 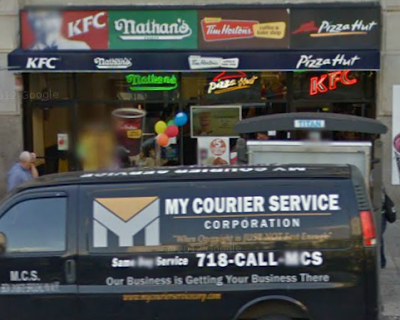 I'm reminded of this after checking out a Tim Hortons location, again in Brooklyn, behind the stately courthouse just off of the Brooklyn Bridge, in a dreary and unappetizing food court, offering that particular blend of low-priced pedestrian food, washed down with bland coffee, that has inexplicably made it a powerhouse in Canada.
To this bloggers mind, it's not a formula for success in a city where most street vendors can offer cheaper and better.
As the old song goes;
"If you can make it there, you can make it anywhere… It's up to you New York, New York!"

So I'm happy for DAVIDsTEA's success and I hope that they keep their head office in Montreal, reminding Canada that our fair city, battered and bruised, remains the creative capital of Canada.

But like everything in Quebec, the dark side of language rears its ugly head and trumps economic and creative concerns.
DavidsTea has been castigated by the language militants as a bad corporate citizen because it doesn't have a French name.
For them, an English name is hard to take, but an English name on a retailer, born, bred and based in Quebec, is even harder to swallow, if you will allow me the pun.

Read Sophie Durocher's article in Le Journal de Montreal, where she tells readers that it may be okay for international American giants to keep their English name, but not for Quebec bred companies, who in her eyes have no right to trade under an English banner.

And so Davids Tea is on the wrong side of the language ledger, another insult to Quebec pasta-chasers who see one more betrayal in a paranoid world of Anglo persecution.

But why the big deal over a name? To paraphrase Shakespeare,
"A tea by any other name would taste as sweet."

The Mario Beaulieus of Quebec drone on about the need for 'outsiders,' Anglos and Ethnics to respect Quebec's francophone majority and that for a retailer, having French employees, French signage, and otherwise all things French, is not enough.

To be blunt, that is just plain poppycock.

By that same logic, English and ethnic Quebec parents would be advised to give their offspring a French name in respect to the francophone majority..... What utter rubbish!
Since when and where in the world and in what country or jurisdiction is a name, in and of itself, insulting and disrespectful?

The  campaign against English language signage and English store names has more to do with an attempt by language militants and separatists to create an altered reality, rather than any question of respect.

In removing English from public display, militants hope to persuade Quebecers that the English and Ethnic communities are irrelevant to the Quebec experience, like ants at a picnic, nothing more than a nuisance.

Like the mom who places her hands over her eyes and lyrically shouts "I CAN'T SEE YOU, I CAN'T SEE YOU!" to her toddler, the children's game is meaningful only to those with an infantile mind.

The old saying, 'Out of sight, out of mind,' is a most appropriate description of French language militants ploy to portray Quebec as a French only affair, despite the truth that it most certainly is not.

Removing English signs and store names from public display conveys the fantastical message that the non-French elements of society are either nonexistent, minor or irrelevant, and so, anything that serves to disrupt that fantasy must be attacked and destroyed, including DavidsTea.
And so it follows that militants don't want to see and don't want to hear of Quebec Anglo or Ethnic success, because it distorts the fictitious narrative.
Think I'm exaggerating?

While francophone Quebecers are infinitely familiar with iconic business names like, Peladeau, Bombardier, Coutu, Laliberté, and Demarais, how many have ever heard of Stroll,  Jarislowsky, Azrieli, Adams,  Bensadoun, Rossy and Miller, who are among Quebec's richest and most successful entrepreneurs, but decidedly not pur-laine.  Link
And by the way, all of them made their fortunes in post Bill-101 Quebec, so let's not argue about colonialism.

Language militants aren't interested in the success of McGill university, Arcade Fire, Montreal bagels and smoked meat, because to them, they aren't representative of the real Quebec and if the Francophone public embraces them as their own...well, bilingualism wins.

That is why there's nary a mention of Quebec's latest success story, DAVIDsTEA, in the francophone press and that is why it's up to the Globe and Mail to report on this Montreal success story. Link

The complaints about English signage and names is an Orwellian voyage of the absurd, where a store name like 'REITMANS' irritates militants because it doesn't sound French while 'SIMON' is okay because it does, notwithstanding the fact that both stores are named after non-francophone founders.

Language militants have been demonizing English for so long that even people like Sophie Durocher have been brain-washed into making a distinction over a name.
She as well as all of us need to understand the underlining racist basis of the attacks.
Shame on all mainstream francophones who have fallen into the extremist trap of condemning a business based on a name rather than the measure of its service.

I can only imagine the outrage in Quebec if a journalist in Calgary or Toronto demanded in print that LE CHATEAU or CIRQUE  DE SOLEIL be condemned because those companies refuse to modify their name, whilst operating in an English province, realistically, a scenario that is so nonsensical, it is beneath discussion.

Condemning businesses or individuals based on the linguistic, religious or ethnic basis of their name is behavior that is unbecoming and vulgar in a modern democratic society and should be condemned by every fair-minded person across all lines.

It's actually shocking and sad that we are having this debate.

Posted by Editor on 4/15/2013 12:00:00 AM
Email ThisBlogThis!Share to TwitterShare to FacebookShare to Pinterest