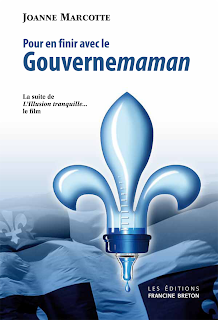 One of my oldest memories is that of my mother gathering the children around the old Formica kitchen table and announcing solemnly that my father had lost his job and that money would be very tight until he found work again.
As a six year old, I really didn't understand what all this meant, but was frightened by the sight of my obviously distressed mother.
Over the next couple of weeks nothing really changed, we ate dinner each night as before and the quality and quantity of the food didn't change. My mother even continued to pay my allowance of 10¢ and the initial fear that I felt at that first family meeting faded. Eventually my dad found work and I'd like to say that everything returned to normal, but normal never really changed.

I'm reminded of this story, because watching events unfold in Quebec, there seems to be an uncanny parallel.
I can't help but feel that Quebecers remain unhealthily insulated and sadly oblivious to the coming financial meltdown because they haven't really felt the effects as of yet. Their allowance hasn't been cut and they haven't had food taken off the table.

Just as my parents used their savings to paper over the fact that there wasn't enough money coming in, the Quebec government has used deficit spending and equalization payments from the rest of Canada to maintain the fiction that the collective Quebec lifestyle can be maintained.

Last week, college and university students across Quebec left their classes to hit the streets in one of the very rare student protests.

Already enjoying the lowest tuition in Canada, students were outraged that the government was hiking fees over several years, which by the way, would still leave Quebec university students with the best deal in Canada, when all would be said and done.

But the ability to maintain such generous tuition fees in the face of a crushing and mounting deficit is of no import to students, because having been insulated from reality (like my mother did to me) they cannot fathom the government running out of money.
In interview after interview, not one student leader addressed the issue of how low tuition rates can be paid for, as if the issue was entirely beside the point.

In blithely ignoring our financial reality, students are really no different from most of Quebecers, who are deaf to talk of deficits and dwindling resources, because the government just keeps paying and paying.

In recklessly spending beyond the financial capacity of the province, both separatist and federalist Quebec governments are equally to blame, not only for the dire financial consequences but the social consequences of allowing citizens to believe that the government has an unlimited source of funds and that a gravy train will always exist.

Read this story in the Financial Post. (Thank you JASON for the link)

And so students continue to demand that their fees be frozen (some demanding that the fees should even be lowered) as well as demanding that the university increase salaries to support staff in a fantasy world where money grows on trees.

Now I'm not going to review Quebec's ruinous social spending programs, you can read an excellent analysis is a book that came out this week, by Joanne Marcotte entitled 'Gouvernemaman,' a very appropriate term that describes Quebec's 'Nanny State'

In the face of criticism, especially from commentators in the rest of Canada who decry Quebec's expensive social experiment, defenders claim that Quebec, as the highest taxed people in North America are paying for their own programs and that they are proud of the society that they have built.

But Quebecers aren't really paying for their social experiment at all, rather it's Canadians through equalization payments and the children of Quebecers who will bear the burden of one of the world's highest public debt.

Those who defend the grand social experiment remain fiercely defensive and proud, the fact that Quebec marches to a different tune, a badge of honour.

But let us ignore for the moment the fact the this grand social experiment is not only unsustainable, but has seriously impacted the future financial well-being of generations yet unborn.

Has all this social spending made Quebec a better society?

The sad truth is that Quebec has evolved into an unproductive and lazy society which lags Canada and the OECD average in almost every benchmark of success.
This more than anything else is the tragedy of Quebec's social plan.

It seems that over-generous entitlements have had the effect of replacing industry with indolence. The easier it is to get free money, the harder it is to get people to work hard on their own account.

As entitlements grow, the standard of living falls. It's a natural and insidious consequnce.
The more money the government of Quebec gives out or re-distributes, the poorer its citizens become..


"In 2010, the standard of living in Quebec (measured by gross domestic product (GDP) per capita) amounted to $ 40 174, or about US$6,000 dollars less than the average among the 20 member countries of the OECD, and only $4,742 more than the lowest standard of living of these countries recorded, namely, that of South Korea.

But the attraction of easy money is hard to give up and for many Quebecers working to make a good living doesn't seem worth the effort when one can get by on government handouts doing nothing.

For those born into a society where government handouts are part of daily life, dependence is as addictive as crack.

So the question remains.
What will happen when the inevitable collapse of the nanny state occurs when the government just plain runs out of money and the ability to borrow?

In 2014 the Federal Equalization agreement comes up for renewal, and the $8.6 billion or 12% of the Quebec budget will be put into jeopardy.
If Quebecers believe that Prime Minister Harper will blindly sign off again on the massive transfer of wealth from the RoC to Quebec, they are deluding themselves badly.

What will happen when the Quebec government's deficit (currently at $4 billion or 7% of the budget) spending can no longer be supported?
Deficit spending and equalization payments account for almost 13 billion dollars, or 20% of the Quebec budget. 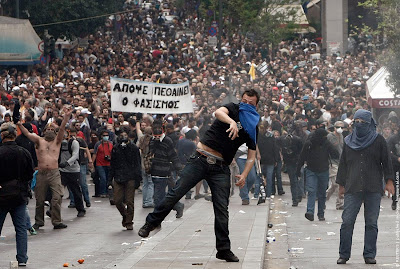 The day of reckoning is not that far off and the spending cuts, required to stave of bankruptcy, while not on a scale that we've seen in Greece, will nevertheless be massive.

Quebecers, having been coddled their whole lives, will react much as the Greeks, bewildered and flustered, unable to fathom how the government could actually run out of money,

I daresay the collapse of the nanny state will be as traumatic for Quebec society as it is today in Greece.

Can't happen?
To believe otherwise is to ignore reality.
Posted by Editor on 11/14/2011 12:00:00 AM
Email ThisBlogThis!Share to TwitterShare to FacebookShare to Pinterest