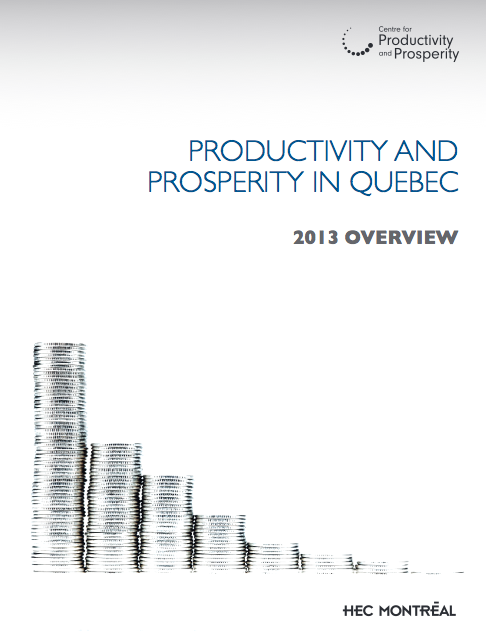 Montreal's prestigious HEC (business school) of the University of Montreal  has released the 2013 version of its PRODUCTIVITY AND PROSPERITY IN QUEBEC report which paints a pretty bleak picture of the Quebec economy.

The report has politicians buzzing in Quebec City with the
apologists out in force, counteracting the report's main finding that Quebec is living above its means and lags in just about every important economic indicator.

Here are just a few extracts;

"With per capita GDP of $44,428, Quebec trails most of the 20 OECD countries in our sample. More
specifically, the province falls below both the Canadian average ($52,177 per capita) and the average of the
selected OECD countries ($50,588 per capita). In fact, Quebec surpasses only Japan, Italy, New
Zealand, Spain and South Korea in this ranking. The United States, with per capita GDP of $63,414, has a standard of living 43% higher than in Quebec, meaning $18,986" 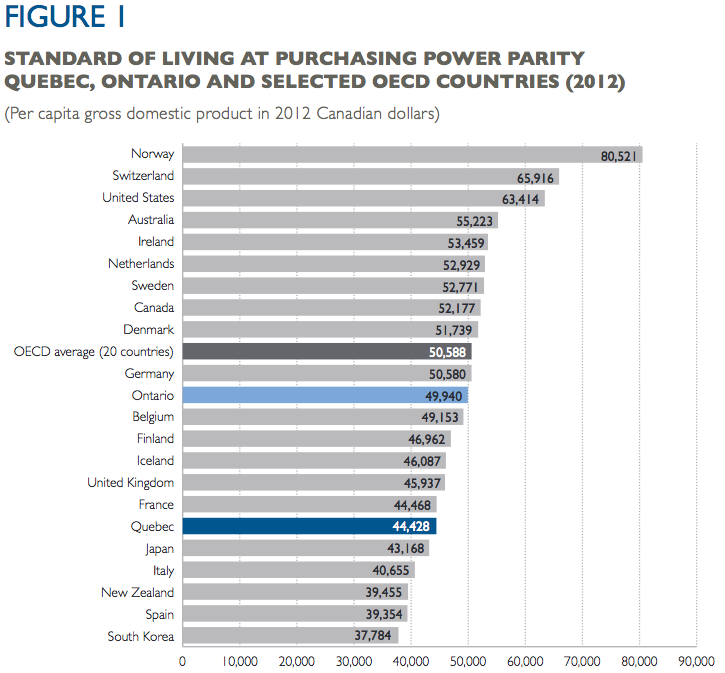 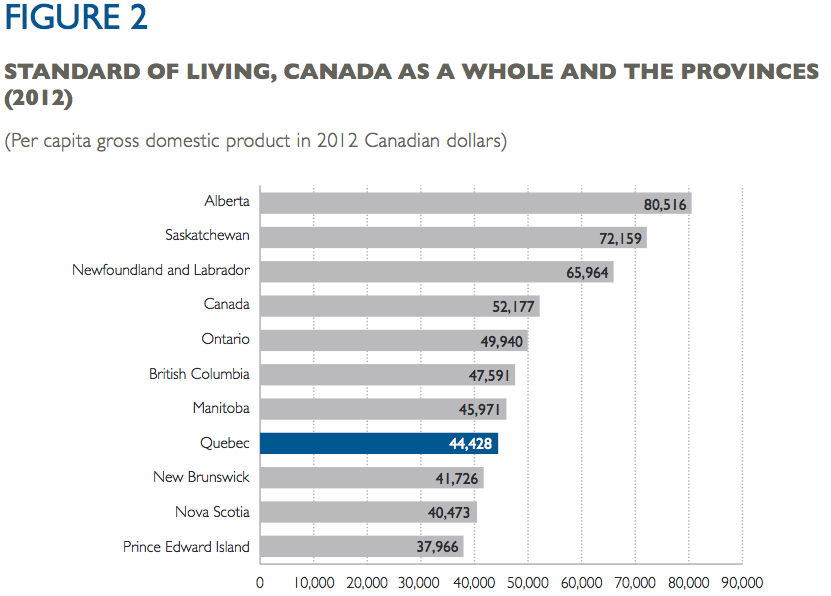 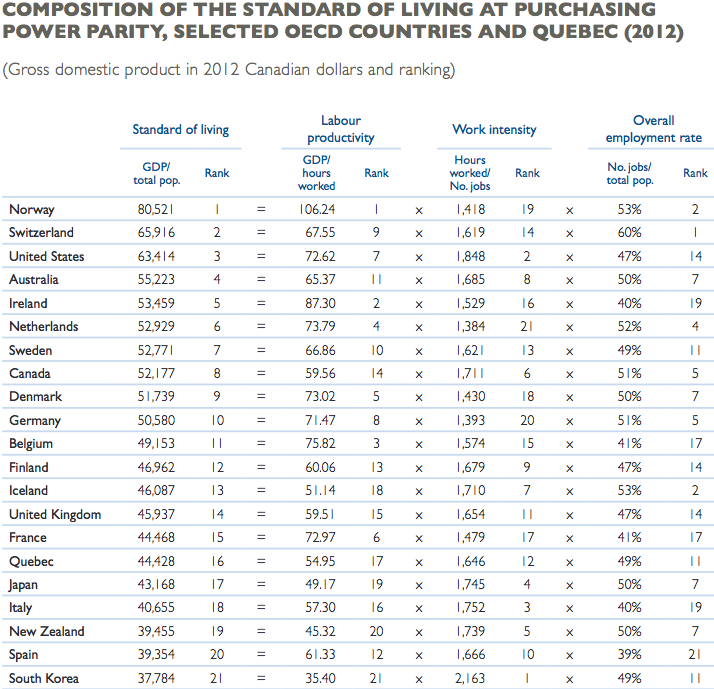 Read the entire report, it is fascinating and easy to understand, everything is explained for the layman.
IN ENGLISH    EN FRANCAIS

Who knows where the Quebec corruption bug will finally end?
Maybe we'll soon find out that public day cares are accepting payoffs for preferential enrolment or perhaps Quebec driving schools are giving passing grades for a fee or perhaps parking meter attendants are swiping tons of quarters out of the meters or doctors are taking thousands of dollars to jump the waiting line for an operation or pharmacists are taking payoffs from big pharma to push certain drugs.

Oh wait...all that really did happen!
But no matter, it's no big deal, after all, we Quebecers are now immune when it comes to  revelations over corruption.
It would probably be big news elsewhere to have the ex-director of the province's  provincial police force indicted for theft, along with three other highly placed cronies.
But not in Quebec, it hardly raises a commotion.


"Quebec provincial police have formally charged their own former director and three other ex-bosses with fraud, theft and breach of trust. Steven Chabot, Alfred Tremblay, Jean Audette and former top cop Richard Deschesnes are accused of siphoning money from a secret police fund to pay a bonus and illegal consulting fees.
The case has given the public a rare look into the internal workings of the police force, known as the SQ.
Deschesnes ran the SQ from June 2008 until October 2012, when the Parti Quebecois reassigned him shortly after it took power.
His co-accused, Chabot, who retired in 2010, was the SQ's assistant director in charge of criminal investigations. Audette was Chabot's successor.
Tremblay, the fourth man charged this week, was once a chief inspector at the SQ.
All four men were to be fingerprinted and photographed Wednesday at a Montreal police precinct.
The former officers are scheduled to appear at the Montreal courthouse on Feb. 13." Link

And the hits keep coming;


The investigation comes on the heels of the discovery of a high ranking mole on the force two years ago.
Ian Davidson, was a just retired detective-sergeant who had been accused of selling information on police informants to members of the underworld. Link

"One of the country's former top biker cops, now accused of selling information to the Hells Angels, says he will "not go down alone," in a telephone conversation obtained by a joint CBC and Radio-Canada investigation.
Benoit Roberge, a former sergeant-detective with the Montreal police, was arrested in October, and is now facing two charges of gangsterism, one count of obstruction of justice and one count of breach of trust. His case will be back in court on Thursday." Link


Believe it or Not- Quebec version

I don't know what to make of this, but the owner of the seniors' residence in L’Isle-Verte where 32 seniors perished in a fire was given A STANDING OVATION at the memorial service held in Church.
I'm not kidding.


"Speaking to a throng of reporters outside the church in L’Isle-Verte, Roch Bernier said it was not the right time to say whether he would rebuild the residence.
He said the mass, attended by more than 1,000 people, was a day for the victims, the missing and residents of the town.
Bernier received a standing ovation as he stood up to speak at the mass.
“What you’re living inside, we are living it inside as well,” he told the gathering, which included Premier Pauline Marois and Liberal Leader Philippe Couillard. Link

REBUILD THE RESIDENCE???:?
Is he kidding?
Who's going to live in it, they're mostly all dead!!!!


"The railway executive behind the company whose train smashed into Lac-Mégantic wants people to know he's been suffering, too.
Looking back at the year as it comes to a close, Ed Burkhardt said he's still troubled by the Quebec derailment and has thought about it every day since the July 6 catastrophe killed 47 people and destroyed part of the town.
The chairman of Montreal, Maine & Atlantic Railway Ltd. also told The Canadian Press in a recent interview that he's sustained significant personal financial losses since the disaster." Link

Gone are the days of Quebec PQ politicians like Réne Levesque and Jacques Parizeau whose command of the English language was quite remarkable.
Today's PQ politicians are products of a different era, one where English is practically non-existent.
I can think of only three or four PQ ministers who are actually bilingual and can provide answers to English questions without leaning over to aides for a translation.

Here's is Agnès Maltais humiliating herself, much to the derision of the media which had great fun with it. Link{fr}
By the way, her reference to 'giklers' is from French 'gicleurs' (sprinklers)

Not everyone saw the humour in it all, the insufferable Mathieu-Bock Coté rose to her defence telling readers that only the 'colonized' need to speak English flawlessly.
"Flawlessly?


"Those who scoff at Agnès Maltais' English are sending  a clear message that one cannot reach the heights of society without being "perfectly bilingual", that is to say, to speak English as if we were native English speakers."  Link{fr}

Is he joking?
How about just making a little sense in English, nobody is asking for flawless.

At any rate, Madame Maltais is in good company, her cabinet colleagues regularly make idiots of themselves in English, notably Pauline Marois who in a BBC interview meant to tell the Scottish they had a strong identity, but accidentally said that they were weird: "Scotland is a people with a strange identity," she said.

Just for fun the Journal de Montreal did a fun story on some of the gaffes made in English by some noted Quebec politicians.

For those who read French here is a good laugh. 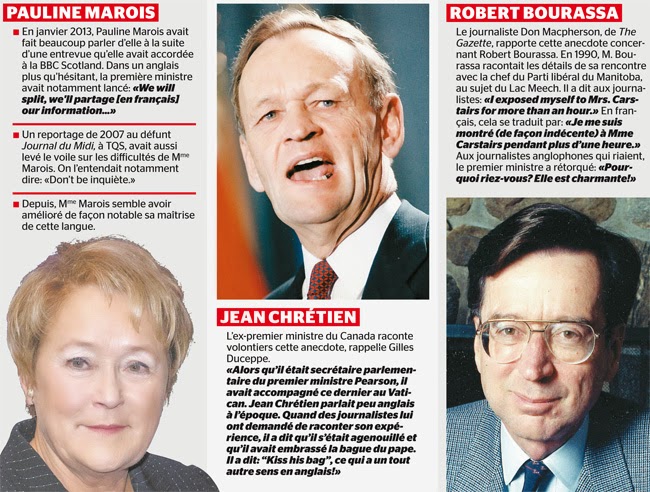 Loose translation:
Pauline Marois meant to tell a Scottish reporter that she would share referendum information, but instead said " We will split, we'll partage our information.'

Jean Chretien meant to tell a reporter in English that he kissed the Pope's ring, but instead told them he 'kissed the Pope's bag' a completely alternate meaning, by inserting the French word 'bague' for ring.

Then there was Robert Bourassa who told reporters that he 'exposed himself to to Ms. Carstairs for more than an hour' much to the amusement of reporters. Mr. Bourassa then demanded to know what the reporters found so funny. Read the Story{fr} 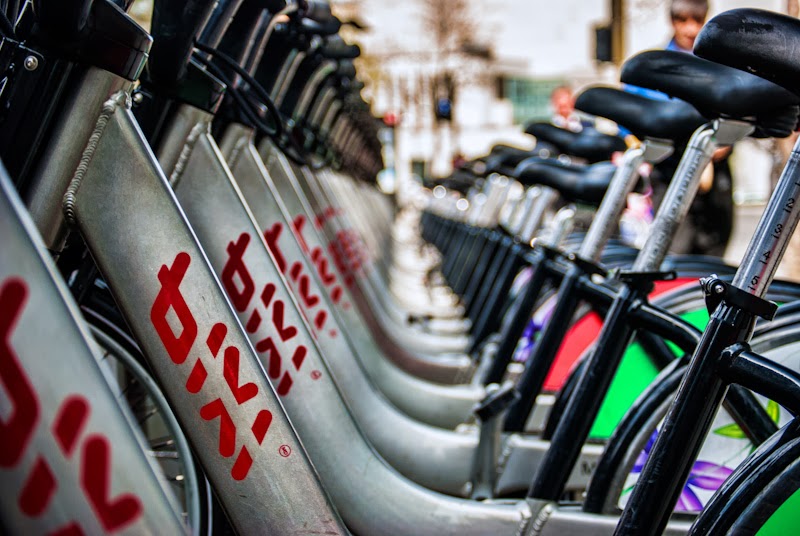 "Managers at BIXI are defending their decision to hand out hundreds of thousands of dollars in bonuses — just weeks before the company filed for bankruptcy protection.
BIXI paid a total of $232,000 to 39 permanent employees in December, including $14,000 to acting CEO Michel Philibert." Link

In its French-only press release defending its actions, Bixi called the payments an adjustment meant to bring salaries in line with the median Montreal salary. WHATEVER THAT MEANS!

So what exactly is a Régime d’intéressement à court terme (RICT).
Actually it translates as "Short-term Incentive Plan"
And what exactly does that mean?
I had to look it up......

Short-Term Incentive Plans
Short-term incentives, also often referred to as annual incentives, are intended to compensate executives for achieving the company’s short-term business strategy based on achievement of goals by the board compensation committee.

Bixi managers justified the bonus' because they were written into the contracts of the 39 employees.
But exactly why ordinary employees have contracts is a question that should be answered as well as what exactly was the criterion for earning the bonus.

Photo of the week 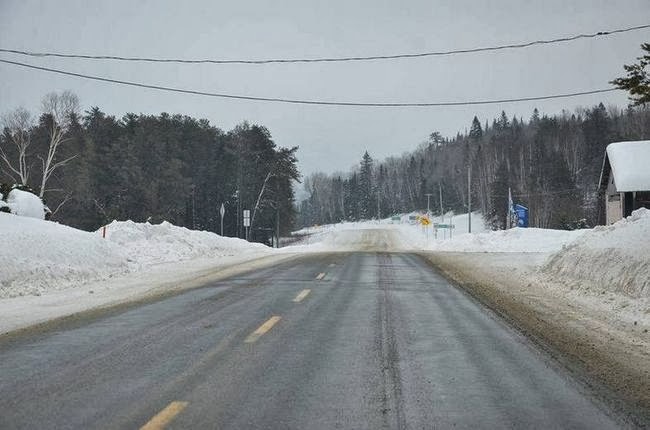 Here is a recent photo of the border between Quebec and Ontario up in Abitibi where Quebec Highway117 meets Ontario's Highway 66.
Can you guess which side is Quebec and which is Ontario? HaHa!!

An article in the Journal de Montreal compares the ineffective snow removal of Quebec's roads department with that of Ontario's. Link{fr}
I've driven this road a couple of times between Rouyn/Noranda and Kirkland Lake and was always amazed at the difference in the quality of the road surface between Ontario and Quebec, with the Quebec road qualitatively inferior.
What made the situation all the more absurd is that the speed limit on the Ontario side is 80 kph while in Quebec it is 90 kph!

How about a little more nonsense

Pauline Marois and the PQ are giving a $350 million loan to build a cement plant in Port-Daniel, in the Gaspé.
The Canadian Association of Cement makers is 'disappointed and shocked' considering that their Quebec members are operating at 60% capacity. Link{fr}

and some further reading....

There's something a bit indecent in trying to make Poutine a Gourmet food. Link
Me, the only thing I demand is that the cheese is not served cold and the fries not too thin.
La Belle Province.....call me old fashioned!

Since we won't be watching those famous Super Bowl commercials up here in Canada, let me provide you with a preview of one of the best.


Have a great Superbowl Weekend

Posted by Editor on 1/31/2014 09:16:00 AM
Email ThisBlogThis!Share to TwitterShare to FacebookShare to Pinterest