Crime Commission back in session 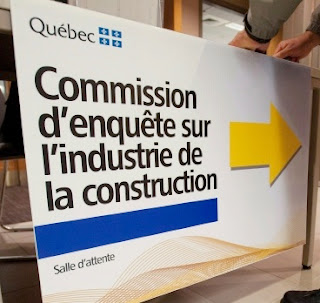 After a summer recess, it was back to public hearings where more revelation were made, this time concerning fixed contracts in Gatineau.


"An employee of AECOM (which bought out smaller firm Tecsult in the late 2000s) based in the Outaouais region, Gélinas told the inquiry that between 2003 and 2008, a system of collusion involving four major engineering firms was in place in Gatineau." Read more

"Earlier in the day, the inquiry heard how collusion among engineering firms in Quebec City was rampant in the latter half of the 2000s, with eight companies forming a cartel in 2004 and sharing in the profits when the federal government began pumping millions into infrastructure projects in the provincial capital.
According to former AECOM (Tecsult) executive Patrice Mathieu, getting the cartel up and running proved trickier than expected, and the firms were caught red-handed the first time they attempted to fix their bids.
In 2004, the city had launched a call for tender on a major project to install retention basins in the St-Charles river, Mathieu said, and a handful of companies held discussions in advance in an effort to avoid “a price war.” Read more

It seems that there is so much corruption to expose, that the commission has admitted that it cannot do it all in time allotted.


“We have said it before and it bears repeating: our mandate is vast, the period we must cover is long, and despite an extension of 18 months, the inquiry has a limited period of time to examine all of the things that are part of our mandate,” LeBel said.  Read more

Perhaps the commission should change tacks and assume everybody in the industry is crooked and invite the few honest ones to testify...that list would be short and sweet!

I've translated the hate message sent to the media by the perpetrators of pig's blood attack on a mosque in Chicoutimi. 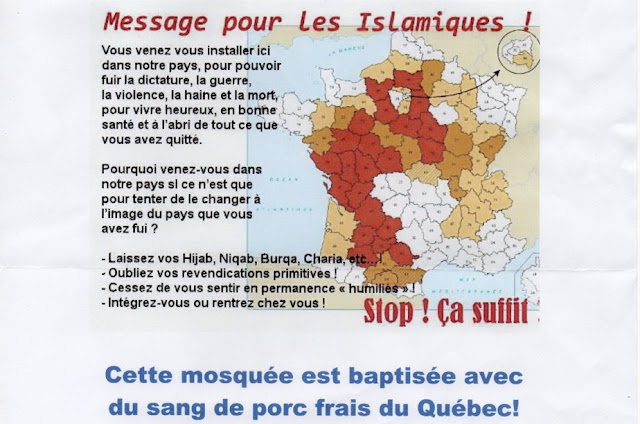 Why have you come to our country, if not to change from the type country you left behind?

- Leave behind your Hijab, Niqab, Burqa, Charia, etc.!
- Forget your primitive beliefs!
- Stop believing that you are permanently humiliated!
- Assimilate or go home!

THIS MOSQUE IS HEREBY BAPTIZED WITH FRESH QUEBEC PIG'S BLOOD!

But most of the lines in the message were lifted from other posts that I found online.
Both the first and second paragraph can be found here HERE
But there is an even earlier version from Belgium  HERE

Now one of the interesting aspects to the story is the complete rejection in the French press, that the vandalizing of the Chicoutimi mosque was anything but the act of a deranged and troubled mind.

Richard Martineau takes up the defenses of the good name of Quebecers, providing statistics that backs up his claim that there are more incidents in Ontario, than Quebec. Link{fr}
But in another article in Le Devoir, the author points out that hate incidents are going up in Quebec, while down in the rest of Canada. Link{fr}


"This is not the mentality of the people of the region. This is an isolated and stupid act. I can not believe there are people who think like that. It only takes one or two stupid people perpetrate acts like this."- Jean Tremblay , Mayor of Saguenay

"Informed by the press that some members of the Muslim community are worried about the reaction to the proposed bill , Minister Stéphane Bédard Bédard explained that he considered it unlikely that violence stems  from the debates. "

But let us remember that in the case of Richard Bain, various public separatists, including Mario Beaulieu are holding the Anglo media responsible for Bain's radicalization because of the proliferation of so-called Quebec-bashing stories.
So the Anglo media is responsible in part for Bain, but the French media innocent of inspiring the hate-monger in Chicoutimi.
A case of arguing Black one day, white the other.

According to some, the vandalism on Chicoutimi's Mosque was done by anti-charter advocates
@S_EFortin 17 h
Many signs lead us to believe that this vandalism is in fact anti-charter activism. Don't be fooled!

@ClaudeLanthier 16 h
@danielthibault The better question would be, are secularism opponents using this mosque incident?

@Drouin
Maybe they (the Muslims) did it (to?) themselves

the act or fact of deluding oneself

Maybe Richard Bain is secretly a separatist and committed his act as a pretend federalist to boost support for sovereignty.
Or maybe he's just deranged, considering Occam's razor.
At any rate......


"Three days after somebody poured pig blood on a mosque in the Saguenay -Lac -Saint- Jean, several members of the Muslim community attribute this event to the debate on the Charter of Quebec values, which would lead to a rise intolerance........

"A woman in our association was looking for a job recently and  met a director of day care which posted a position. When she showed up to the meeting with her headscarf  she was told that the job was no longer available.: "says Ahlem Belkheir , Vice President of Association of Algerian women.

She says Montreal is full of these kind of stories ever since the government of Pauline Marois made ​​the identity issue a priority.. Link{fr} 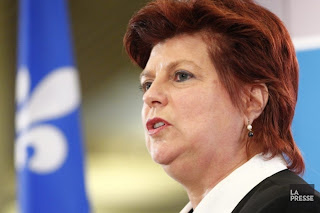 The PQ minister of families was beaming with the news that she had a solution for parents unable to place their children in public $7 a day programs.

She is creating a spanking new universal waiting list so that parents don't have to place their bambino's name on the various individual waiting list held by each daycare. Link

Now for the kicker, it will take up to a year for the creation of the list, which is about as complicated to create as writing an app.
If Apple Computer worked at the speed of this government in applying innovation, we'd still be using floppy disks.

Actually, I can't wait for the list to come out. We may find that there is a five-year wait for pre-kindergarten daycare!
The only question that will remain is when exactly you can place your name on the list, because if you have to wait until your child is born, it's too late!

For every $100 of income revenue, the chart indicates how much came from the Ottawa's Employment Insurance program.
For every $100 earned by the citizens of the Gaspé Peninsula (which includes that paragon of gainful employment, Îles-de-la-Madeleine) $15.50 came from the unemployment program, while in all of Alberta that number is $1.50

If you read French, do the author the courtesy of reading the story HERE because it is deliciously biting and sarcastic.

Awhile back I told you that a student harassed by the Montreal police should sue the police over the unwarranted ticketing. It has come to pass!

"A university student facing $6,500 in fines for her actions during last year's student protest movement is filing a lawsuit against a Montreal police officer and the city of Montreal.
Katie Nelson, 21, claims she was subjected to repeated harassment by police officers while taking part in protests, singled out for fines and tickets even if in a crowd of people who were left alone.
Constitutional lawyer Julius Grey has taken up her case on a pro-bono basis and will be asking for $24,000 in damages.


Katie Nelson says she has been subjected to harassment by Montreal police because she opposes tuition hikes (Aug. 9, 2013)
The suit reads, in part, "The high frequency and the systematic nature of these events make it statistically impossible for the source of these sanctions to be anything but political profiling or a personal vendetta." Read more


If this thing ever gets to court, it will be a slam dunk, because no judge will buy the police malarkey that they were justified in the targeted ticketing.
Courts defend their own territory and aren't particular fans of extra-judicial justice. Mr. Grey made it exceeding easy for the police to cave and settle out of court, I would have asked for a lot more. But he is taking on the case for free, so a trial would be a nuisance.
Since I've been on a hot streak with my predictions, let me tell you that this will be settled out of court in her favour with a gag order thrown in to avoid humiliation. The only thing the SPCUM lawyer will ask Miss Ms. Nelson is how she spells her name as they prepare her cheque, or if she'd like it in hundreds or fifties!

Evelyn Samantha Donis facing charges in connection with a near-fatal tomato attack last fall was a no-show in court on Monday. Forty-eight-year-old Alex Montreuil was at the Jewish General Hospital in Montreal for a CT scan, the day after the Quebec election-night shooting, when he alleges he was attacked with a tuna and tomato sandwich..... Link

The victim, complains that officials are not taking the case seriously. The crown took six months to lay charges and when it came to her court date, she didn't show up. The police said they wouldn't actively pursue her, which standard operating procedure.

It's not that the case isn't being taken seriously, it's just that EVERY case in Quebec is handled...badly and slowly. 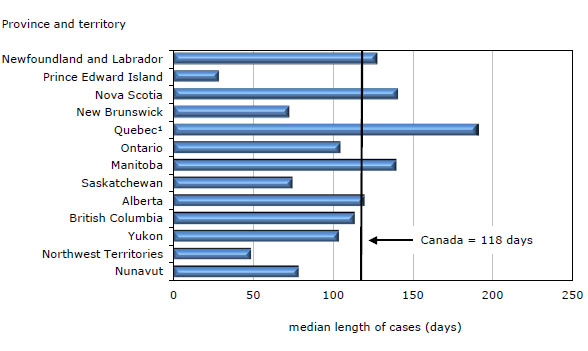 Why aren't the police actively pursuing her? Because they don't pursue anybody over a relatively minor crime.
The police are just waiting for her to turn up and when they find her, she'll be arrested... maybe.
If she's caught in another province, Quebec police will have to send someone to collect her and when the case is relatively minor, they usually don't bother. After 10 years.......it's over.
But  Mr. Montreuil is doing the right thing by making a clamor, the police do react to bad publicity and this will clamor definitely bump up the file on the priority list.

Now let me tell you what an assistant director of the Montreal police told me concerning those who break out of jail.
The police stake out the escapees mother's house for a few days, (they always want to see mom.) The same for the girlfriend and last known associates.
After a few scant days, they give up unless the escapee is very dangerous or infamous. Odds are a snitch will rat him out or he'll be arrested in the commission of another crime before too long. Wonderful police work!

When I commented to my friend that it didn't sound like much of an effort, he retorted that it was unfair to say so, since the police put almost all the criminals in jail.
Whaaat?
How can that be? I reminded him that police only solve about 15% of crime and only about 2% on their own, the rest is snitches and confessions.
And so he explained that even though what I said true, almost all criminals commit lots of crimes and eventually even the low solve rate catches up with them.


Have a great weekend!

Posted by Editor on 9/06/2013 12:43:00 AM
Email ThisBlogThis!Share to TwitterShare to FacebookShare to Pinterest