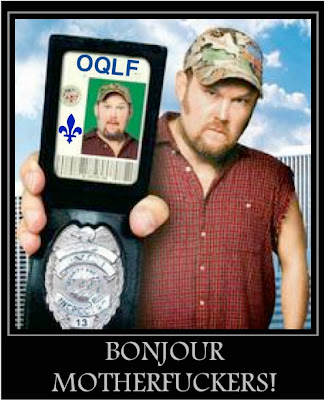 With friends like Mario Beaulieu, it's likely that the OQLF doesn't need enemies, his defence of the agency in the matter of 'Pizzagate' must have elicited groans of embarrassment at the agency already reeling in humiliation.

The restaurateur went public with the nonsense and the story went viral, with newspapers and media reporting on the story around the world.

The largest foreign reaction came from Italy, where the insult was taken rather personally and seen as an attack on the country's honour.

Here's one headline that you don't even need to speak Italian to get the gist of;


"Ristorante in Canada ‘troppo italiano’: obbligato a riscrivere in francese il menù"
" An Italian restaurant in Canada, in the state of Quebec, was forced to rewrite its menu because it contained too many words in our language. It may sound crazy, but this extreme measure was demanded by no less than the Office québécois de la langue française, or the authority in Quebec who has the task of protecting the French language in a country predominantly English."  Clicca per il link


Here's a headline that you probably won't understand;
"Bareja po kanadyjsku? Policja językowa w Quebecu"
but it just goes to show how far the story has travelled when the Polish press is picking up the story where our province is being held up as a laughingstock. 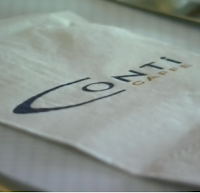 The publication of the story seems to have served up some backbone for others to come forward with their version of linguistic terrorism, dished out by an agency gone rogue.

Perhaps the silliest story is that of a restaurant in Quebec City, Caffe Conti, ordered to replace the word 'CAFFE,' used I imagine to class up the place a little, with the French version CAFÉ , hence the title of this blog piece, 'OQLF...Get the EF out.'
See a video story

Others have come forward including restaurant Joe Beef who was ordered by the OQLF to take down some 'English' artifacts hanging on the wall. Link

Here is a snapshot of what the OQLF occupies its time with; 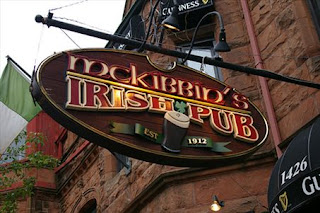 McKibbin's Irish Pub on Bishop St. downtown is too English for Quebec's language police.
McKibbin's, with its dark beams, warm fireplace and colourful Gaelic decorative touches, has been popular with the Concordia University crowd since it opened 10 years ago.
But the Office québécois de la langue française has suddenly noticed the antique English-language advertisements on the pub's walls and wants them removed.
It objects specifically to vintage ads that say such things as "Guinness Dublin 1759," "Ireland Trademark," "Cudthromach Aire," "Eat Palethorpes pork pies fresh today" and "Guinness Extra Stout, Draught & Bottled St. James Gate, Dublin" and "Caffrey's Cream."
Many of the signs - some hand-carved, some painted on tin - were acquired in Ireland by the owners of McKibbin's to give the bar an authentic Irish atmosphere.
In a letter to co-owner Rick Fon this month, the OQLF says that too much English is spoken by the bar's staff, that a customer has complained about not being served in French and that the English signs on the walls are an affront to Quebec's language laws.  Read the rest of the story


A ENGLISH school board was ordered to communicate in French.


It seems that the agency is facing a 'tipping point,' (that magic moment when an idea, trend, or social behavior crosses a threshold, tips, and spreads like wildfire.) and that those previously silent are now and forever empowered to denounce the persecution of the OQLF.

The agency has overnight become a laughingstock and an embarrassment to right-minded francophones, who cringe at the negative publicity rocking the internet.

To make matters worse, Mario Beaulieu, Quebec's chief language supremacist has added more fuel to the fire of humiliation by claiming that the whole story is a plot by the English media, which he characterized as a 'cabal'  meant to hurt Quebec AND that the francophone media have fallen into a trap by picking up the story!

Now the agency which takes itself entirely too serious, is itself being mocked mercilessly like with the complaints that the "GO HABS GO" cheer in the Bell Centre or on city buses is illegal.


"The Office québécois de la langue française (OQLF) has put itself on an inevitable journey to self-destruction in the last two weeks. The enormous list of absurd judgements from the province's language police that have come to light are a sign that the Office has gone off the deep end with power. The resulting social media outcry has put the OQLF on an irreversible and unintended path to its own demise. While they have acknowledged that perhaps they went too far in some cases, the damage has already been done and any legitimate authority the OQLF ever had has now vanished." Huffington Post

Let's hope that Quebec merchant's no longer maintain a policy of silent submission and the recent outcry provides them with a little dose of backbone.

It's time for merchants to give the agency a hard time, both publically and privately. If every establishment would take the agency to task and just refuse unreasonable demands, it wouldn't be long before the OQLF drowned in paperwork and litigation.

A word of advice to those afraid of the expense of fighting the agency.
It doesn't take much money to defend one's right, all that is required is steely nerve.
It's close to two years before any case will reach court and a merchant can always acquiesce before that.
In the meantime a tremendous amount of effort is expended by the agency with threatening letter after threatening letter burning up bureaucratic time and effort.
The OQLF is a paper tiger, even in a worst case scenario the fine for a first time offender is rarely over $500
If everybody just said no, the agency would collapse under its own weight.

One last story....
When the OQLF visited our company, the inspector was particularly interested in the specialized computer software that ran the company and asked me why it was in English.
I mumbled an answer that I didn't know why, turned and laughed under my breath.

This as you can imagine set the inspector off and it wasn't long before a full blown investigation was undertaken over the unilingual software.
After ignoring a couple of threatening letters, warning our company of the impending Armageddon,  I received a desperate call from our software company telling me that they too were under a full scale investigation about the so-called unlingual software and wanting to know why I didn't inform the OQLF that all one had to do to toggle to the French version was to press the F12 key.

As you can imagine the OQLF was none too amused over the wild goose chase that I sent them on. Ha! Ha!
Unfortunately, the software company was also not amused......

Posted by Editor on 2/27/2013 12:00:00 AM
Email ThisBlogThis!Share to TwitterShare to FacebookShare to Pinterest