Only in Quebec is a STOP sign a Language Issue. 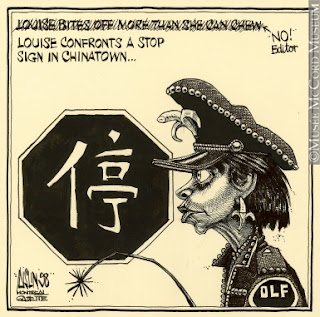 I thought that the once simmering "STOP sign" controversy was long over, until reading some recent posts on French language militant websites where it appears that the subject has reared its ugly head once again.

You'd think that with the province drowning in debt, the health care system on the verge of a collapse, the dropout rate among francophone teens an utter disgrace, one wouldn't have the time or energy to debate such a mundane subject as STOP signs, but such is not the case.

In another century, this cartoon by Montreal Gazette cartoonist Aislin, said it all, the sad pettiness and vindictiveness that characterized the issue.

When the Parti Quebecois first came to power, it became public policy to sanitize all road signs and slowly over the years, English slowly disappeared from road signs across the province, in all but a few officially bilingual towns.

And so Quebec's distinctive and beloved bilingual STOP/ARRÊT sign went the way of the dinosaur, replaced by the unilingual ARRÊT.

In France 'STOP' is what is written on their stop signs, believe it or not.

In fact most countries in the world, especially in Europe, employ STOP and nothing else on their signs.  For an interesting picture gallery go here.

That being said and Quebec being what it is, the idea of 'STOP' on signs no longer sat right and so the grammatically incorrect ARRÊT was decreed politically correct.

Last summer, I filed what I thought was an amusing post about Stop signs for further reference, believing it to be an atypical rant, something that perhaps didn't deserve to be critiqued on its own.

But last week another Stop sign complainer graced the pages of another militant French language website, so I decided to take a closer look at the complainers, where sadly I found, a particular twisted state of mind, one that still exists in Quebec, to what extent, I cannot really say.

If you live in the greater Montreal area, you may have noticed these last years that "STOP" signs have slowly begun replacing the now familiar ARRÊT or ARRÊT/STOP signs.

Apparently the powers that be, have now decided that Quebec has matured to the point where STOP can be employed alone, rehabilitated like a political prisoner who spent a decade in the Gulag.

But of course this doesn't sit well with some language militants who are outraged that such an affront to the French language is going unchallenged and so they have taken up the good fight to keep French pure and to police words like STOP from entering the common French lexicon.

You'll remember that during the francization campaign to remove English from road signs, the common ARRÊT/STOP sign was particularly galling to French militants because it reflected a bilingual society, nothing less than an anathema to them. And so the innocent STOP/ARRÊT sign was treated to a cruel onslaught of vandalization.


I'm surprised that nobody is talking about it, but have you noticed that the city of Granby has retained its stop signs that say: "Stop" while the rest of the province, we see "ARRÊT". Is this city exempt from the Bill 101?....

....I can't accept to live in English in Granby while the rest of the province lives in French"

"I spoke with Mr. André Jean, Public Works of the City of Granby, today and he replied that the word "Stop"is legal and comes from Old French (?) that the word is in the French dictionary and that the word is accepted OQLF and MTQ. It is the word "ARRÊT" that is not the correct French term and the government accepts these signs since 1978. They are accepted by the road signs manual of Quebec accepted as well as everywhere in the world, even in Germany, he told me. I asked him for a copy of the report and  will check it out...."

"The word 'STOP' is French and has been for a hundred years! I agree that the word STOP on a sign gives the impression of English monolingualism. On the other hand the word ARRÊT is less acceptable because in general French, this term refers to a bus stop! I do not understand why our signs don't display 'ARRÊTEZ' or something similar in Quebec. Can someone give me an opinion on this?


"The real significance of these 'Stop' signs is that it is an act of defiance towards Quebec. In Quebec the stop signs that say 'ARRÊT' are a symbol of the survival of French in North America. Remember that Quebec is the only "state" in the Francophone world that writes ARRÊT on its signs. This is a legitimate way to tell the world that we exist. These signs are somehow inscribed in the cultural heritage of Quebec.
Westmount with STOP signs reject Quebec, flouting Bill 101, ignoring the minority, helping to create and maintain the two solitudes in Montreal." LINK

Can you believe all of this over stop signs?
Incidentally, this writer of the above post must never have been west of Decarie Boulevard in Montreal. Had he visited Hampstead, Côte St. Luc and practically every other west island community, he'd have found the same STOP signs widely in use. 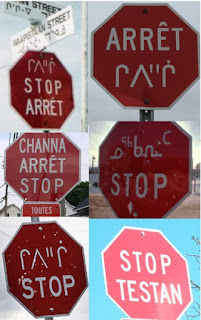 Incidentally, a public works employee told me one of the reasons for using the 'STOP' sign is because they are cheaper and available in bulk from suppliers across North America. Hmm....

The stop sign debate even crosses over to the native communities in Quebec where natives, like all  Quebeckers, are divided along linguistic lines.

At any rate I don't think the OQLF or Transports Quebec will have much influence on what the natives display on their resevations! 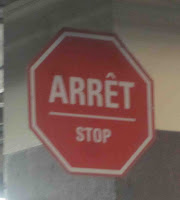 My least favourite Stop sign is one that remains in the parking garage of the Westmount Square parking complex. Not only is it insulting, but completely stupid, no doubt the product of a nincompoop employee making a bad decision. 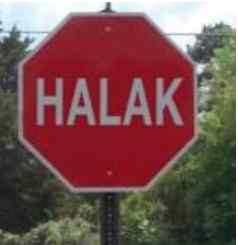 On the other hand my favourite stop sign is this one that appeared last Spring as the Canadiens were making a heroic playoff run.


Posted by Editor on 3/03/2011 12:01:00 AM
Email ThisBlogThis!Share to TwitterShare to FacebookShare to Pinterest