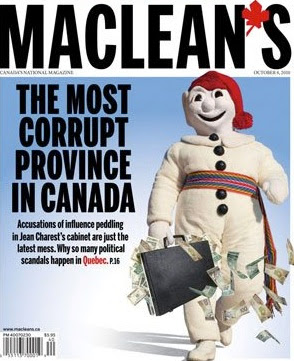 It's safe to say that Quebecers, rocked by endless stories of corruption, collusion and malfeasance over the last year or two, have become obsessed with the issue, to the point that it has become the overriding public concern, ahead of the accumulating debt problem, high taxes, deteriorating wealth, a health system in trouble, education issues and indeed even sovereignty itself.

Ask the average Jean or Jane in the street what the number one public issue in Quebec is and invariably, corruption will almost certainly top the list almost all every time.

The voluminous catalogue of corrupt business people, public employees and politicians exposed as crooks has indeed tested our society's ability to cope, the ubiquitous stain of dishonesty tarnishing us all, leading to a collective sense of rage and overwhelming feelings of humiliation.
And so it is natural to seek a scapegoat.
It is convenient and therapeutic to find someone else to lay the blame upon and of course, it usually falls upon the Jews or the Italians to take the rap, both communities historically singled out whenever blame for society's ills are to be apportioned.

In this case, it is of course the Italians who are being scapegoated because they are strongly represented in the construction industry and are front and centre in the recent scandals at Montreal City Hall.
This, largely because the Charbonneau commission's first witness, corrupt businessman Lino Zambito, testified that a bunch of Italian entrepreneurs were paying off city officials to 'win' contracts with the help and oversight of the Mafia.
And so the blame game is on.... c'est la faute des Italiens..

"Bid-rigging, a cartel headed by businessmen of Italian origin and  corrupt officials and politicians accountable to the mafia, as confirmed by testimony before the commission..." Link{fr}

Of course these stories are tame, compared to the stuff published on the Internet, where the entire Italian community was quickly held responsible and smeared for the foibles of a few.


"What strikes me the most, since the beginning of the Charbonneau Commission's hearings, is the number of Italian-Quebecers that have been implicated, and the total absence of reaction of the leaders of the Italian-Quebec community, who seem totally indifferent and insensitive to the damage to their reputation that these rotten apples have inflicted...." Richard LeHir, vigile.net{Fr} 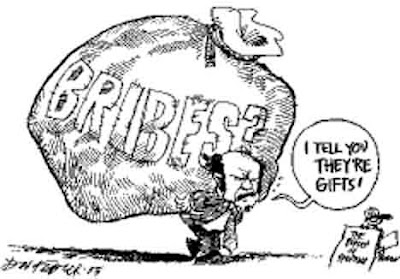 Of  course the unsaid contention is clear, that these 'rotten' Italians, like a drug dealer enticing a twelve year old to try his product, were somehow responsible for corrupting the hitherto 'white as snow' Quebecois ....bah!!

But as the corruption inquiry widens and as events play out, a different, reality emerges, one which exposes the reality that corruption in Quebec transcends language, ethnicity, religion and social class.

The English, the French, the Ethnics, the rich and the poor, the educated and the not so bright, are all as guilty as the next when it comes to corruption.
It is perhaps, one of the few aspects of Quebec society where everybody, but everybody participates equally.

Let us review what we have found out in one short year;
On and on it goes, stories of corruption that would be unbelievable if presented in a Hollywood movie, with enough miscreants to fill a fictional rogues gallery.

Let us not forget the wholesale waste and mismanagement, while not always illegal, represents a callous disregard for the public purse.
The egregious financial mismanagement of Concordia University, the extremely poor judgment of the Board of Directors of McGill in unanimously appointing a two-bit crook like Arthur Porter as President.
Let's not forget the cynical disregard of the public's interest by the Anglophone/Jewish chairman of the Old Port of Montreal in publicly supporting his Catholic/Francophone serial expense-account abusing president. 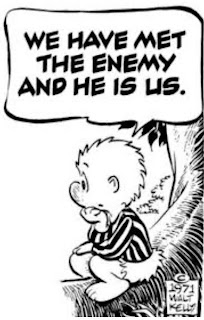 How about the generally Protestant English Montreal school boards sending employees to Hawaii and the Dominican Republic in the middle of winter to 'study' conditions, or the Catholic French school boards sending teachers on Yoga excursions to fancy hotels, all on the arm of taxpayers.
Read: Quebec Anglos Prove We Are Pigs as Well

In all this, the only thing that all the players have in common is that they generally have nothing in common.
English, French, Ethnic, public servants, politicians of all stripes, professionals, blue collars, business people and clerical, all the various religions and races, it seems that everybody from all walks of life seems to have a hand in the sorry saga of Quebec corruption.
This is one gravy train that is an equal opportunity employer!

So let's have no more finger pointing and scapegoating, Quebecers from all walks of life are equally to blame and as the famous cartoon character  POGO said;
"We have met the enemy and he us"

Posted by Editor on 12/05/2012 12:00:00 AM
Email ThisBlogThis!Share to TwitterShare to FacebookShare to Pinterest