The French language news magazine L'Acualite ran a pretty big spread on Anglophones, highlighted by a poll purportedly gauging Anglophone attitudes towards the French language and living in Quebec.
As soon as I saw the cover and the name of Jean-François Lisée, Quebec's most notorious fact-spinner,  I knew that Anglos were in for another hatchet job.
Any story that presents Mr. Lisée as some sort of authority has condemned itself to mockery, akin to having a Catholic Clergyman write an unbiased piece about abortion or a Rabbi writing a piece critiquing the wisdom of Kosher foods.

Mr. Lisée is notorious for painting Quebec in the most favorable light, using cherry-picked facts and figures to convey an utterly distorted view of reality, an alternate world where Quebec is rich, successful, hardly indebted and under-taxed.

He recently wrote a  book entitled  "Comment mettre la droite K.-O. en 15 arguments" (How to knock-out the Right in 15 arguments.)
Of course the book paints a hilariously skewered view of reality, reproducing all sorts of facts and figures, that support his unlikely conclusions. 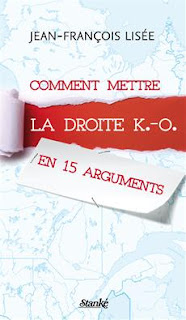 Thank goodness the blogosphere has the likes of DAVID over at antagoniste.net, a writer who has taken the time to deconstruct each and every argument made by Mr. Lisée, utterly destroying his conclusions.
If you read French, the following is a must read, it will convince you, once and for all, that Mr. Lisée is a dangerous fraud.

And so, any work associated with Mr. Lisée is automatically suspect and likely to make use of the same type of misleading and deceitful practices that are the hallmark of his work.

I was not disappointed.

Now a lot of Anglo journos were rightfully insulted by the survey, you can read some reaction here;

" L’actualité magazine has a special edition out on anglophones that suggests many of us don’t know Radio-Canada from Canada Goose."Read the rest of the story; Josh Freed: L’actualité of living in Montreal not reflected in magazine

"Quebec anglophones beware: your relationship with the province's francophones is being tested, and clearly not with a view to strengthening linguistic harmony." Read the rest here --A survey that sets up Quebec anglos to fail the integration test

But what the above writers all miss is the fact that the survey and article is actually more  telling of francophone attitudes then those of the English.
The questions asked were so politically skewed and biased that they laid bare the astonishing preconceptions of the authors.

First let me give you the overall conclusions of the poll, based on a bunch of survey questions asked to Anglophones only;

Do you speak enough French to carry on a substantive conversation?..... 81% YES

Do you believe that's it's possible to live one's whole life in Quebec without having a substantive conversation in French.....59% YES

I'm at piece with the idea that Montreal will become a city where English predominates while the rest of the province maintains its Francophone Charm.....59% YES

Given Globalization and the power of English it's just a question of time before the essential element of work will be in English in Montreal......65% (18-34 year-olds) 42%(55 years old+)

Should large companies be allowed to hire unilingual English managers even if it means francophone employees would have to work in French?......YES 63%

The survey and the supporting articles comes to the conclusion that Anglophones, notwithstanding the fact that they speak French, don't want to become part of the greater Francophone culture of the majority, not by a long shot.

Others who read the article may dispute that this is the essential element, but it is really the only conclusion that can accurately explain the biased question and concluding spin.

Let me illustrate the political angle of the interlocutors, by way of the biased questions put to an Anglo defender, Jack Jedwab.

Every question above can be neatly turned around to reflect Quebec Francophones perceived lack of engagement with the majority language of this country.
"Jean-François Lisée, who wrote an op-ed piece in the issue, said he's surprised by the lack of empathy among English Montrealers for protection of the French language." Link

(I would make a burlesque comparison between Jews helping Nazis but I don't want the wrath of a certain touchy anonymous reader  to come down on me!!!!)

Should anglos join the Société Saint-Jean-Baptiste, Mouvement Quebec Francais or Imperatif Francais?
Should they be denouncing clerks that talk only English or signs that offend the majority because a word of English appears.
Should anglophones really defend the French language when its defense consists of limiting Anglophone rights?

A. Francophone Quebecers can live happily in Canada in their own French world, largely apart from the English majority.

B. Anglophone Quebecers can live happily in Quebec, in their own English world, largely apart from the French majority


It isn't more simple than that.

If you can agree with "A" then "B" is a logical extension.

But then again logic is sometimes hard to find in Quebec,
Posted by Editor on 3/26/2012 12:00:00 AM
Email ThisBlogThis!Share to TwitterShare to FacebookShare to Pinterest