The Curious Case Of Marc Bellemare 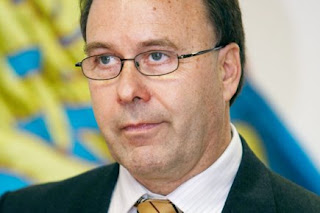 I must say I didn't know what to make of the behaviour of Marc Bellemare, who is the ex-Liberal Justice Minister in the Charest government, way back in 2004.
He's been doing the media rounds telling anyone who'll listen that the Liberal party took scads of money from construction industry types and that cabinet ministers were forced to produce donations to the tune of $100,000 in order to keep their jobs. After dropping the bombshell, Quebec's chief election officer demanded a meeting with him to go over the facts but Bellemare has been ducking the meeting claiming that there is a jurisdictional problem. This week he's been at it again, giving another television interview and adding more scandalous allegations against Premier Charest directly.

Now, I've no doubt that there must be elements of truth in what he says, but there's something about his comportment and timing that has me wondering about his motives.

I've been asking around about him, among those who know, to find out exactly what the story is and why he would besmirch the Liberals six years after leaving politics on his own, seemingly on good terms with the Premier and the party.

First the public record.
Marc Bellemare is a high profile lawyer who runs a practice defending clients who he believes were ill-treated by Quebec's SAAQ, the government agency that runs the no-fault insurance program for all Quebec drivers and which determines compensation to injured people in the case of injury as a result of a road accident.

Recruited as a  star candidate back in 2003, he accepted to run as a Liberal with the condition that he could push his pet project, a law that would allow individuals to legally pursue their rights in court without the constraints of the SAAQ limits on damages.

He won his seat handily and was given the Justice and Public Security ministry. His project to allow victims of automobile accidents the right to sue, hit a brick wall in Cabinet with almost nobody supporting his proposed law, leading to a frustrating personal situation for the Minister, who entered politics with the express motivation of seeing his pet project passed into law.

Then radio 'shock jock' Andre Arthur dropped the bombshell that Bellemare's oldest daughter, Lysanne Messier, was an exotic dancer in a Quebec city strip club that was a known as a Hell's Angel's hangout. At the time Quebec was in the process of dismantling the biker gang via a mega trial that was underway. Any contact between the daughter and the bikers would place the Minister in an impossible position.

Now I had assumed that cabinet ministers were thoroughly vetted before they were hired and I asked an insider how something like this was missed. He confirmed to me that Mr. Bellemare signed a disclosure document saying that there were no skeletons in his closet that could embarrass the government. However, he told me, that at the time, extensive security, financial and family background checks were not routinely undertaken. Hmmm....

Even though the daughter was estranged from her father at the time, the revelation and the publicity hurt Bellemare quite badly, more on a personal level than professional, or so it seemed. The daughter denied that she had anything to do with the Hell's Angels and the press, without any corroborating proof, decided to pass on further reporting on the story.

Premier Charest publicly supported his minister and the issued died. Months later, a disillusioned Bellemare resigned, claiming that the nature of politics didn't suit him.

The part of the story that is not publicly acknowledged, is that the daughter did indeed have contact with the bikers. She was overheard heard in a conversation with at least one biker in Sureté du Quebec wiretaps.
Arthur further reported that the daughter had been known to  carry large amounts of cash, both in American and Canadian denominations. LCN reported that in May 2005 she was involved in a car accident and was found by rescue workers in a confused state with white powder around her nostrils.

I have a reliable source that says the Premier was informed of the situation concerning her contact with bikers by the police and I suppose that Mr. Bellemare was either asked to leave quietly or chose to do so on his own, after an appropriate delay to keep up appearances.

It remains an open question as to where Mr. Arthur got his information about the stripper daughter, it either came from the police or within the Premier's office. Since the resulting brouhaha was damaging to the government, I can't see any body in Charest's office leaking that type of information to the press. That leaves the police as the likely culprit, their motives clearly to rid themselves of Bellemarre. This last part is just my idle speculation.

I was also assured that Bellemare left on very good terms with the Premier, but that doesn't seem right, because, Mr. Bellemare is definitely on a revenge kick. His revelations after six years of silence is payback for something. Whether it be about his daughter, his pet project, or being pushed from cabinet, only Mr. Bellemare knows.

His desire for revenge makes his pronouncements suspect, but I've no doubt that some of what he says is true. I am however reminded of Karlheinz Schreiber, who embellished his dirt on Mulroney for personal gain at the expense of others. Ultimately a lot of what he testified was unsubstantiated.

Mr. Charest is plenty pissed off and first threatened a lawsuit, but now has called for a public inquiry, leading me to believe that Mr. Bellemare has no proof of his accusations.

FOR THE LATEST UPDATE SEE;


Marc Bellemare Going Down in Flames

Posted by Editor on 4/13/2010 12:08:00 PM
Email ThisBlogThis!Share to TwitterShare to FacebookShare to Pinterest